Since the days when only Nintendo existed, the popularity of war games has been undeniably high. Now that we can use our phones as portable consoles, we want to show you the best android war games.

As the list of The 6 best android war games is so extensive, we dedicate ourselves to reducing it to the best 6 to make your choice easier and enjoy the favorites of Android users. 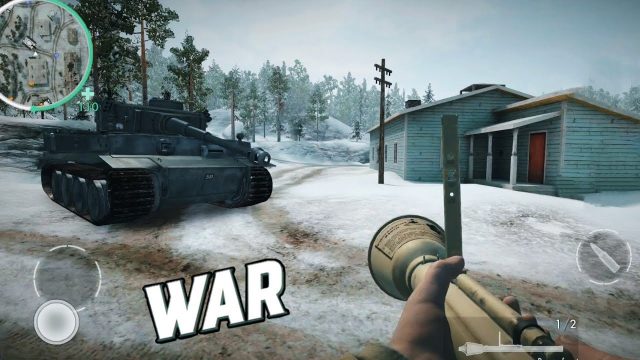 In Code of War, participate in a virtual war where you can fight with your friends in its online mode, which makes the games more fun and the adrenaline rush of knowing who is the best of all.

The purpose of these games is to complete each daily objective. You can do it alone or, as we mentioned before, with your friends.

The best of all is that the Code of War has various weapons for you to win the war with the most powerful and if you are classic as well. Like different scenarios to fight, incredible and unique, you must test your resistance since there is no rest.

Finally, the game has simple and intuitive controls so that novice player can easily understand them. Use the chat window to strategize with your colleagues.

And enjoy imagining how the wars of the future will be, with Infinity Ops. You will have an idea of ​​what the creators of a war of the future imagine, where humanity surpassed technological limits and created weapons and battles outside the planet.

It is full of fiction, with laser and plasma weapons and low gravity that allows its players to jump as if they have superpowers.

Also, Infinity Ops has the option to create your clan or gang to fight against enemies. Make use of the incredible 3D maps so that you can take control of the battlefield, enjoy its excellent graphics.

You can battle alone or make two teams and the best one will take over control of that area. Use all the tools you have in your hands and become the best.

This is undoubtedly one of the classics but most played on the Play Store, initially available for computers and consoles, but now, you can play with mobile phones and tablets. It is Call of Duty. In this version, you can play multiplayer or all against all.

An experience with HD vision in a field where 100 people compete against each other, in the same way, you can compete for teams online in a quick game.

Meanwhile, Call of Duty has a voice chat feature, so you don’t take your eyes off the battlefield while you type, let your friends know where to move and who to eliminate. As you progress, you unlock new weapons, outfits, scores, and more.

This game is full of features and it is best to play it on mobile with good memory and an HD-compatible screen. Enjoy it to the fullest and for free.

This time the war is against an alien invasion. In SHADOWGUN LEGENDS, you will be one of the limitless soldiers who will fight to save the earth from this invasion in a futuristic environment compatible with multiplayer.

The game unfolds on four different planets while you complete more than 200 missions to achieve the final victory.

Similarly, SHADOWGUN LEGENDS has the function of customizing your clothing with special protectors and defenses to protect from the more than 600 available weapons that can shoot plasma. Make teams of three and fight in real-time online.

You can make a name for yourself and get rewarded for your mission recognition so every step you take in this futuristic epic battle.

For those who love planes and airspace, we have War Dogs. In this case, the game takes place in the environment of the Second World War, but this time you will fight from the sky. You have 24 combat planes to play with.

As in the war of that time, the fight is between the main powers, Japan, Russia, the United States, Germany and the United Kingdom.

On the other hand, War Dogs, as in previous games, has multiplayer and individual games. Its controls are simple to master the movements and maneuvers necessary to attack or defend yourself and bombard enemy headquarters and ships.

Fight in large and difficult scenarios. Strategically choose your fighting companions and the teams that they will use to defeat the enemy front.

Pacific Warships, unlike the previous ones, this time the battle is at sea and your weapon will be the best ship in the fleet.

Create your port with the best ships and fight in the seven seas against the enemy fleets in a multiplayer war.

Now, Pacific Warships take place in an updated environment with the best weapons, accurate aiming. You can improve your ship by adding cannons and missiles and reinforcing the decks to protect against any attack.

Gather the best team, achieve your mission, and destroy and sink enemy ships to earn points and overcome missions. Take advantage of its easy and intuitive controls, ideal for beginners.

Relive the best wars, fly planes, fight aliens and win a war at sea. All this is possible and you only need your mobile, WiFi and one of the best android war games that we leave in this article.