Take notes with your Android smartphone

How many times a day do you think among yourselves: “Do I have to mark this”? A song that we like, an interesting offer on a product that you have seen in advertising, a work note or a tasty recipe. Difficult to keep everything in mind, right? Every so often something ends up in some remote corner of our memory, to resurface only when we no longer need it. The problem, in fact, is that we are often victims of circumstances: we do not always have paper and a pen available.

Do not worry, though: your trusted smartphone is able to give you a hand even in this circumstance, with increasingly complete and intelligent applications that will make your old notebook look like a prehistoric object. Let’s get to know them. 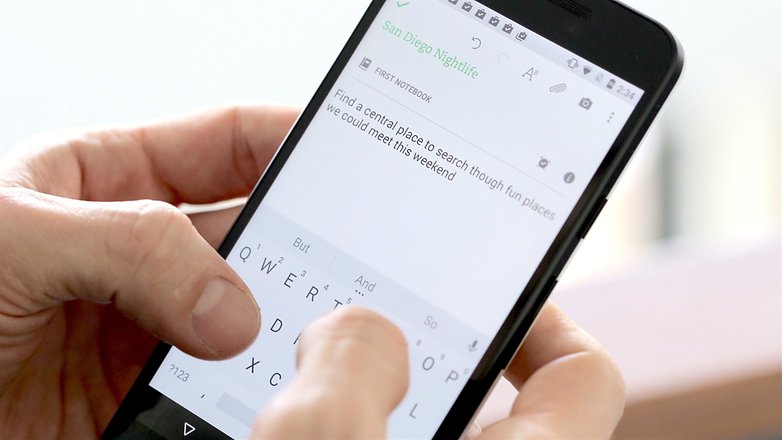 With a number of installations between 10 and 50 million, Evernote is the most popular clipboard application on the Play Store. It offers a high level of interface flexibility, a very complete feature set, and the ability to access it from virtually any device on the market.

Why complicate life with a thousand advanced functions when all we need is a virtual “piece of paper” on which to write down an address, a name, or a telephone number? AK Notepad is the answer. Of course, not very advanced, but complete and rich where needed: synchronization via the Internet, PIN protection and, of course, unbeatable performance and compactness.

Evernote’s huge success has prompted many developers to venture into the multi-platform clipboard market. Catch is one of the most popular and appreciated alternative solutions, devoted to immediacy and ease of use.

Like Catch Notepad, ColorNote is a tantalizing alternative to the cumbersome and complicated Evernote style “suites”. In short, an easy and immediate notebook that enjoys the advantages of multi-device synchronization.

Forums, internet providers, Facebook, Google, Twitter … does not even seem to you to remember too many accounts, usernames, passwords, emails? GNotes simplifies our life a little, allowing us to synchronize our notes using our usual Google account. The trick is simple but it works: the notes are in fact emails, saved in a special folder in Gmail. After all, how many of you use all 10 GBs offered by Mountain View?

Notes Everything is positioned halfway between the simple notepad, like AK Notepad, and the complete suite, like Evernote. Many advanced features, such as voice commands, freehand drawing and much more, but always with an eye to simplicity of use, lightness and immediacy.

Coping with equal weapons a famous and appreciated application like Evernote is a titanic battle; Springpad then decided to give a much more “social” meaning to the note taking, focusing a lot on collaboration, sharing and following.

It’s easy to say “virtual notebook”. In fact, most of the note taking apps we have dealt with so far have little in common with the dear, old paper page. It is all too “driven”, too bound to the peculiar characteristics of electronic devices. Too little free. Fortunately, there is FreeNote!

Google takes the field and openly challenges Evernote; for the moment, the result is mercilessly in favor of Evernote. Simply, the service is not yet mature enough, many useful features are missing. Another negative aspect, a dedicated client is available only for Android; for everyone else, you need to rely on the impractical Web site. We like very much, however, the minimalist and simple interface, Google trademark.

Cataloging and sharing notes efficiently has always been a puzzle, both for developers and users. To date, we have really seen everything: there are those who use colors, those who use tags, who complicate folder structures, and so on. Fetchnotes reminds us that, sometimes, the most clever solutions already exist, and we use them every day: directly from Twitter, here are the #hashtag and @user.

Just use it for a few days to realize that the system is very good: it works, is effective, and allows an incomparable operational speed. But there are some limitations: to start with, there are a few tons of features missing, which Evernote users might miss

The competition has grown a lot in recent times, but Evernote proves to have one more gear. Complete and detailed, yet simple and intuitive and accessible from virtually any device with display, processor and modem. However, we can no longer speak of absolute domination of the scene: some competitors are looking very fierce, choosing the path of differentiation, in place of copying an end in itself without particular innovation. The most macroscopic example of this phenomenon is Springpad, which with its innovative social network focused on creativity and inspiration of each of us, earns the “silver medal” of our comparison.

Personal preferences aside, what matters most is that each app has its own personality, a series of good reasons to be chosen. Included Gnotes that, despite the rather serious stability and reliability problems, convinced by its pleasant, light and well-studied interface.

And you? What is your trusted notebook? Are you still irremediably linked to Evernote or have you wanted to experiment? Tell us about it in the comments!