Stickers and BitMoji come to Gboard in beta

Have the keyboards applications reached the peak of their possibilities? As for pure and hard writing, it seems so, because the latest features of the main keyboards are more focused on adding multimedia elements than improving writing.

This is the case with version 6.5.3 of Gboard, the keyboard of Google, whose main novelty is the inclusion of two new elements: Bitmoji and stickers, which come to accompany the old emojis and smileys and the latest animated GIF.

Add Bitmojis to your chats 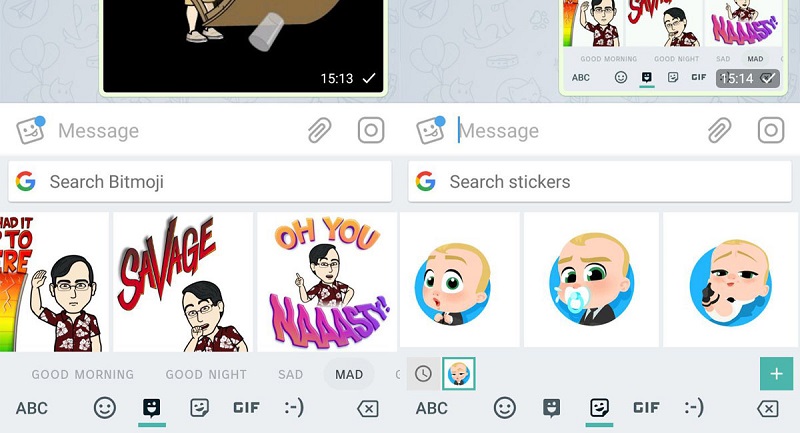 The popularity of Bitmojis varies from region to region. It is basically a kind of avatar that represents you and your friends that you can configure in different postures, emotions and situations. That is, a custom sticker, similar to what Google did with Allo, but rather more complete.

Support in GBoard depends on the installation of the official Bitmoji application. You must install it, create an account and create your Bitmoji before you can send it from Gboard. Once you have it ready, you can get the different categories of “emotions” and send them from the keyboard directly … to those applications that support multimedia sending from the keyboard, such as Hangouts, WhatsApp or Telegram.

You may also like to read: Google contacts officially arrives on any device with Android 5.0 or higher

The other new feature is the support for stickers packages that must be downloaded separately from Google Play. At the moment there are not too many, with 13 results . With the stickers happens the same as with Bitmoji, you must first install the other applications and open them before they appear in Gboard.

You can now download this version of Gboard from the application’s beta program or by downloading the APK directly. In any case, the news of the beta of Gboard does not take too long to reach the official channel, so everything is a matter of waiting.