When choosing which mobile photo editor to use, two of the most repeated names are Snapseed and Lightroom. The tools of Google and Adobe have managed to gain a reputation and popularity with which few applications can compete, although in Google Play we are able to find great publishers alternative to the classic ones.

This is the case of Pixlr, an application that, with more than 130 million installations on iOS and Android, is not short of popularity precisely, but that in recent years seems to have been relegated to the background due to the irruption of the two services mentioned above.

That is precisely why today we wanted to revisit what not too long ago was one of the most popular image editing apps for mobile. This is our Pixlr analysis.

Everything you can do with Pixlr on your mobile

One of the main reasons to use Pixlr is the great potential that it hides thanks to the endless functions and tools it offers. And it is that in addition to allowing retouching photographs, the app includes functions such as the creation of collages, the use of predefined templates, and even has an integrated camera function, from which to capture images before editing them, and all without leaving the app Next, we will analyze each of the different sections of the app.

Upon opening the application, we find an initial screen with the different modes available, and the first one is the camera function. If we select the icon, Pixlr will open a camera viewer from which to capture photos, either through the rear camera or the front camera.

However, unless you want to take advantage of the filters and effects in real time offered by Pixlr, it is not entirely recommended to use this function. Mainly, because the captured images will not have all the quality they could have if they were taken with the native camera app of the phone, and also the possibility of using the secondary sensors of the device, if any, is lost. 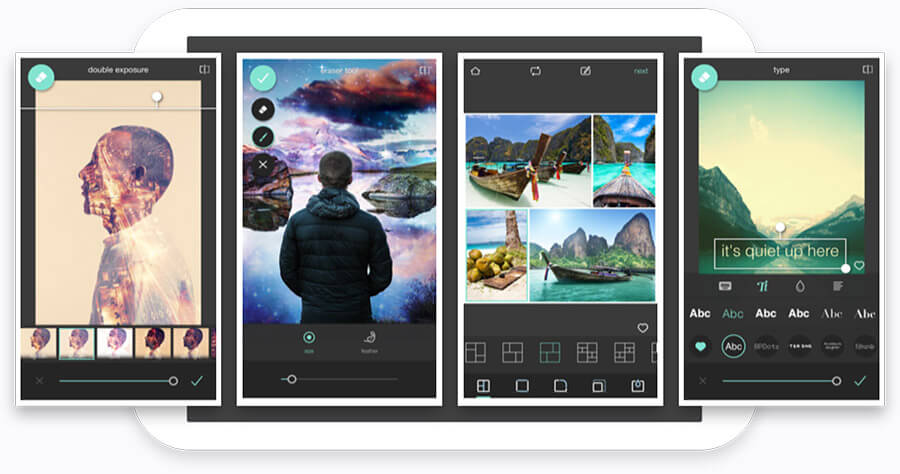 We pass to what will probably be the function that Pixlr users use most. Right next to the camera icon on the main screen of the app, there is the direct access to “Photos”. From here, we can select an image from the gallery to retouch it in the application editor.

One aspect to keep in mind is that * Pixlr does not allow you to edit several images simultaneously, for example, to add a watermark or resize several photos quickly.

That said, once selected the Pixlr image takes us to the editor. Here, we have a series of tools organized in a lower shortcut bar, which from left to right offers the following functions:

Pixlr also allows you to create collages, so you no longer need to have several such apps installed on your mobile.

The process of creating collages is very simple: select your photos, choose the template and modify the size to your liking. That is all. Then, you can modify aspects such as the ** size, color or style of the borders or the format of the images.

As the function of collages, templates offer the option to choose between predefined styles that can be modified using our own images. Most of the templates offered are prepared so that we only have to choose our photos, and at the most, add some text, so it can be a useful function when generating images for social networks such as Instagram.

Experience and ease of use

During these days, I have used Pixlr from a “photographic” point of view, so that the function of the app that I have used the most has been that of editing and retouching photographs. In this sense, comment as a positive point the possibility of revealing RAW files, a function that not all editors integrate.

In addition, it is an editor complete enough to integrate most editing tools that most users might need to retouch their photos before sharing them on social networks.

What is quite improved is the user interface. Not only in terms of aesthetics – but also – but more in relation to the experience of use. Perhaps the biggest drawback in this regard is the fact that the changes made in the editor are not shown in real time in the preview of the image while modifying each parameter, but it is necessary to lift the finger of the slider to be able to see how the image would remain. This is a problem that does not happen in most publishers, and that translates into a greater difficulty when leaving the images to our liking as we do not have an exact reference of the result at all times.

On the other hand, tools such as a “stain remover” brush similar to what we can find in Snapseed, or failing that, a “Repair” function that is more useful than the current one, are missing.

Probably, Pixlr would not be my first option when editing a photo from your mobile. Not because the application is bad, which is not, but because there are equal or more complete alternatives, but more intuitive and simple to use. And the truth is that it is surprising, because the desktop version of Pixlr, Pixlr X, is far superior to the vast majority of online image editors that exist today.

In my opinion, those looking for an advanced image editor should opt for tools such as Snapseed or Lightroom. On the other hand, those who only want to retouch their images and give them a specific style, VSCO can be a great option. Pixlr, on the other hand, can be useful if you want to have a “multi-purpose” image editing application, which can be used to carry out different creations ** without using other tools.