How to convert video in Mac with MacX Video Converter Pro

There are several reasons to convert the format of a video, for example to be able to play a movie on your tablet or smartphone, or to be able to upload and insert it on a website or simply to be able to view it on your computer without having to install special codecs.

If you use a Mac and you need to convert video files from one format to another, there are different solutions, both free and commercial.

These days I got to try MacX Video Converter Pro, a paid software for Apple users that lets you convert video files and that supports more than 320 video codecs and more than 50 audio codecs.

The program allows you to quickly transform M2TS, MP4, MKV, AVI, WMV, MOV, FLV, AVCHD files into the desired format, but above all it already has a series of templates that allow you to carry out video conversions based on the target device. For example, it is possible to select a video and decide to convert it for an Android tablet, an iOS device or a Blackberry. 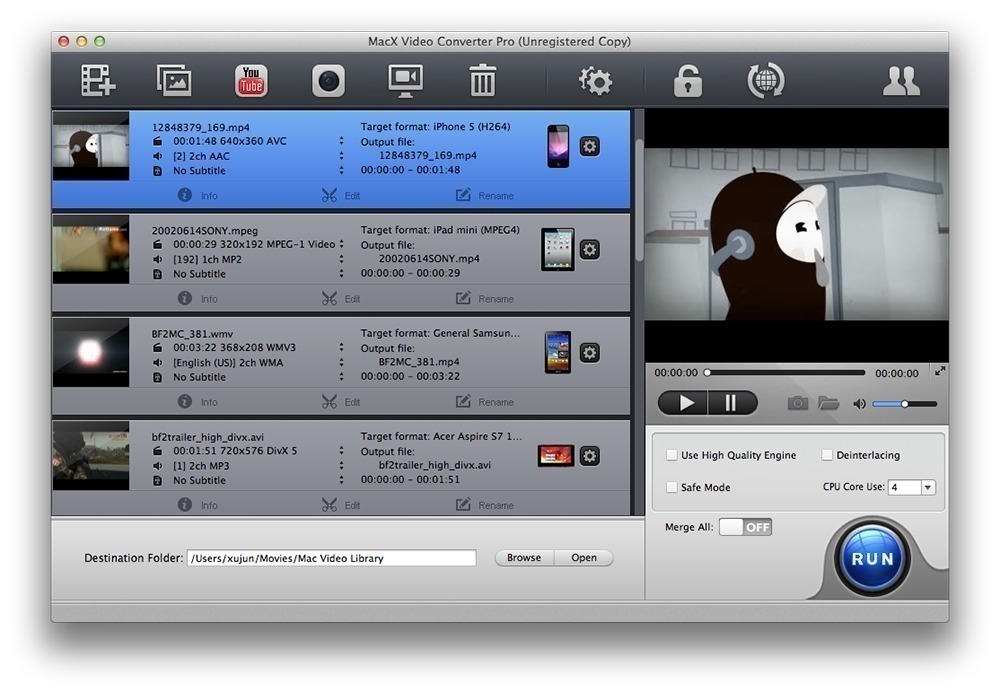 But the options do not limit the choice of the brand or operating system of the portable device, but also allow you to select the precise model, so as to obtain a file with the optimal resolution and size for your device:

Once the target device has been chosen, it is then possible to set the desired output quality, moving the indicator present in the selected line. Among the devices covered by this program there are for example: iPhone 5S / 5C, iPad Air, iPad Mini, Apple TV 3, iTunes, HTC One M8, Samsung Galaxy S5 mini / S5, Galaxy Note 3 / 10.1, Samsung Galaxy Tab S , Amazon Kindle Fire HDX8.9, Google Nexus 7, Surface Pro3 and the PlayStation 4.

In addition to conversion functions, the program also allows you to make changes to files, such as merging multiple videos into a single file or cutting a single movie into different video files, adding subtitles and even a watermark to the video. This watermark can be both a text and an image.

An additional feature provided by MacX Video Converter Pro is downloading and converting videos from YouTube. In practice, starting from the URL of the video on YouTube, the program allows the download of the video and the subsequent conversion to the desired format. Obviously there are already services and software to download videos from YouTube or even to convert YouTube videos to mp3, but MacX Video Converter Pro makes everything much easier without too many steps.

Among the other available functions of MacX Video Converter Pro mark …

Regarding the video recording from webcam or directly on screen there are certainly specialized solutions with better features, but if it is a sporadic need, MacX Video Converter Pro performs this job very well. However, the sector where it definitely shines is the conversion between the various video formats. 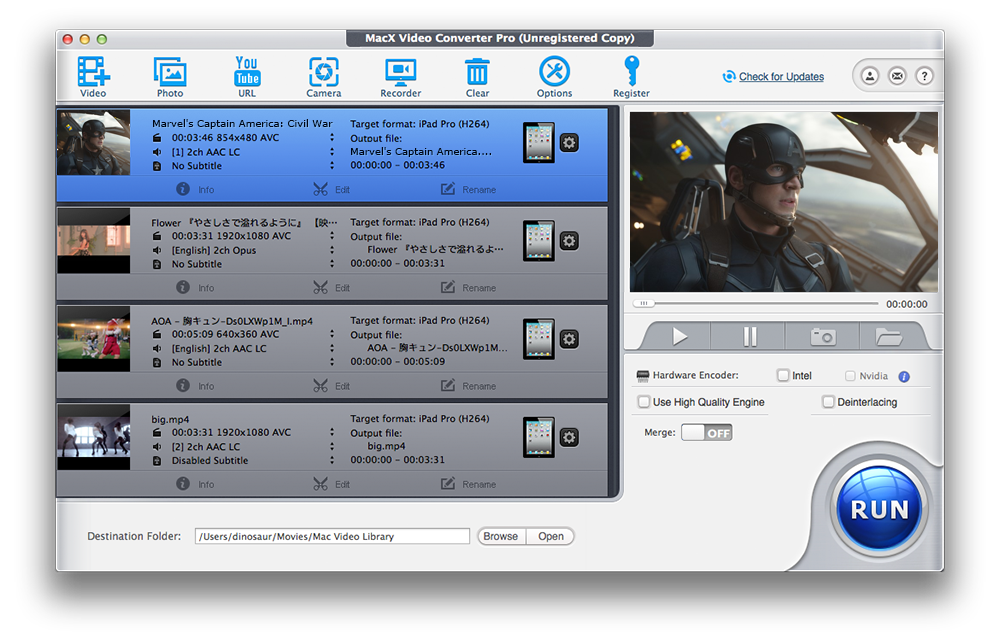 If you prefer a free solution for converting video files on Mac I suggest you take a look at Handbrake, which is also Open Source. It’s less practical, less feature-rich and supports far fewer formats than MacX Video Converter Pro but it does its job very well.

The new version 5.9 of MacX Video Converter Pro has introduced support for Intel Quick Sync Video technology which drastically reduces the conversion time of a video file. The new version of the software has also added support for output formats relating to the latest mobile devices released on the market such as the iPhone 6S, the iPad Pro and the Samsung Galaxy S6 Edge.

Personally I tried to convert a video of 1920 × 1080 pixels lasting about 5 minutes downloaded from YouTube in iPhone 6S format with H264 codec and here are the results:

With the video I examined, I saw a reduction of about 10% in conversion times.

In this case the reduction in terms of time required was around 40%.

Disclaimer: a copy of MacX Video Converter Pro was provided for free by the software manufacturer.